‘Ateneo Martial Law Museum’: False and a shame for the university

WHAT will they think about next?

The gall of this phantom entity that calls itself the “Ateneo Martial Law Museum” for claiming that TV host Toni Gonzaga was not doing her job for not questioning Ferdinand Marcos Jr. fiercely enough in his head interview – face to face with him.

In the first place, the “open letter” was not signed, a sure sign that the author does not have the balls to identify himself and is hiding behind this entity which bears the high name of Ateneo.

Those who created this entity and named it like that either ignore the term “museum” or are sneaky propagandists. For Christ’s sake, consult any dictionary, and it will tell you that a museum is “a building in which objects of historical, scientific, artistic or cultural interest are stored and displayed”.

Britannica even emphasizes: “The museum differs significantly from the library, to which it has often been compared, because the pieces housed in a museum are for the most part unique and constitute the raw material for study and research. An entire library can be demolished and its books converted into a digital library. It cannot be done for a museum.

There are no “virtual museums” because you can’t keep, say, a medieval sword, an antique vase, or even Rizal’s first edition of Noli Me Tangere in cyberspace. These idiots behind this Ateneo martial law museum are confusing virtual tours or representations of museum websites (like the Louvre or the Museum of Modern Art) with “virtual museums”, which cannot exist without is no museum they represent.

The only museum I know of in Ateneo is the Art Gallery and when I was in high school a small science museum in Manila Observatory housing old science instruments.

So, what is this “Ateneo Martial Law Museum”? Check it out yourself at https://martiallawmuseum.ph where it only exists, nowhere else. The website doesn’t even identify who runs it, although – hilariously – it lists the names of “illustrators.”

The martial law expert: the executive director of the site

It is simply an Internet site, moreover amateur, which contains articles criticizing, very crudely, the dictator Marcos and the martial law. His section “Martial Law in the Data” is based entirely on a 1993 article by a left-wing American scholar and a rather inept opinion piece by Rappler. Most of the articles on this website are those that circulated immediately before or after EDSA 2, which the Yellows vigorously disseminated in their myth-making campaign at the time.

It is far from being a “museum” whose most important feature is that it houses artefacts from primary sources. It is simply a yellow propaganda site and an amateur on top of that. He reveals, however, that one of his “partners” is The Knowledge Channel, which is owned via ABS-CBN by the oligarch Lopez. No wonder one of his major articles is titled “The Second ABS-CBN Shutdown,” which says Congress’ refusal to expand its franchise in 2020 was a replay of its first stop by Marcos just at the start of the law. martial. 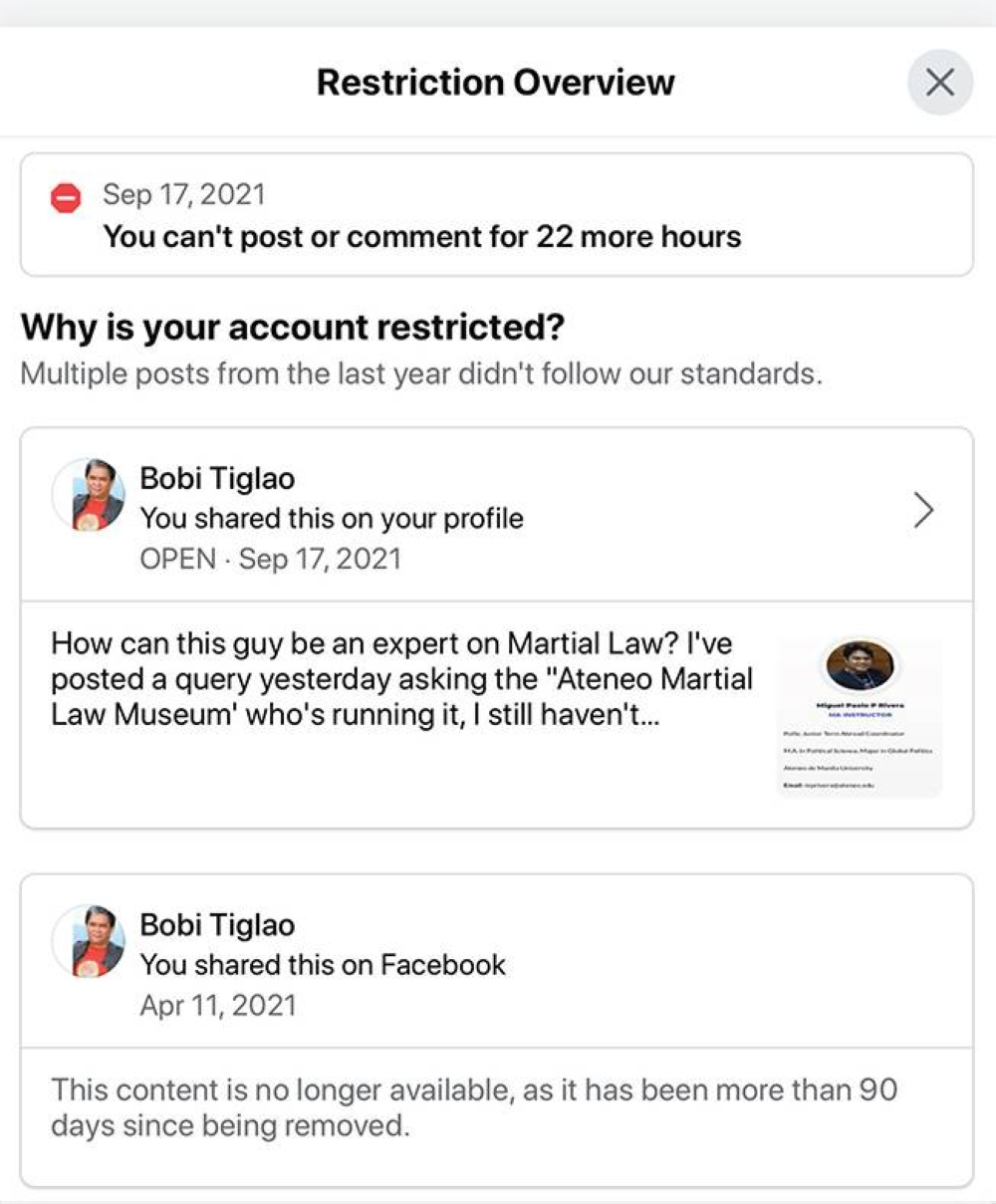 I just ask and I got suspended.

While the website doesn’t even show who runs it, it appears to be a junior faculty member Miguel Paolo P. Rivera, who a former colleague said was an assistant to the communications manager. from the 3rd Aquino administration, Ricky Carandang.

I emailed him last Friday to get his answers on the issues I raised. He did not answer. Only Ateneo’s director of marketing and communications, Matec Villanueva, responded, making such out-of-date but unnecessary statements as, Ateneo “envisions a community that encourages truth-tellers and defenders of democracy.” Truth tellers who present only one side of the problem? Villanueva did not answer my questions about who runs the website and who their staff are. From what I understand, it is only this Rivera who runs it.

What does this guy know about martial law? Looks like he’s in his 30s with only a master’s degree in political science and hasn’t written anything about martial law at all. Even assuming that its website is a museum, heads of museums with the prestigious title of “curator” are expected to be experts in their field and must have a doctorate.

However, it seems very well connected to the Yellow network. I opened a Facebook account in 2010 and have never been suspended for posting things there. Yet one day after posting a query about Rivera’s qualifications to assess martial law, Facebook suspended me for 24 hours! Now I believe these rumors that the Yellows have a network within Facebook.

So why are these yellow cultists calling their website the “Ateneo Martial Law Museum”? Obviously to give it a credibility that, given the current quality of its articles, it will never have. Although the university has shamelessly become a center of the yellow point of view, the name “Ateneo” is still identified with rigorous academic standards.

In addition, a “museum”, of course, involves a building where there is indisputable evidence of something like the uniform of prisoners, pictures of executions, lists of prisoners in Holocaust museums in the States. -United and in Israel.

Idiots who called the Ateneo Martial Law Museum website also must have read that a £ 500million “martial law museum” will be built on the Diliman campus of the University of the Philippines (UP). Either jealous of this or trying to get the government’s attention to get the government to give funding to Ateneo to set up a similar museum, these morons trumpeted their “Ateneo Martial Law Museum” even though it is about a simple website. But the UP one is a real museum, although I can’t imagine what artefacts it will house. This UP museum itself is an abomination, actually a monument to the “martyrs” of the Communist Party of the Philippines.

Marcos was certainly not a saint. But he wasn’t the devil either. Thirty-five years after its downfall and its nemesis, the Lopez oligarchy, it is time to draw a balanced history of the martial law regime.

The management of Ateneo is not doing its job to allow this amateur propaganda organization to use the name of Ateneo, with its 162 years of academic tradition, otherwise we would not understand each other as a nation.

Every program undertaken within Ateneo, in fact, must be approved by a committee made up of experts in the field in which that program is involved. Obviously, in the case of the Ateneo Martial Law Museum, there has been no such approval and therefore it is not in the official directory of the university. Yet he has gone to town falsely portraying the country that Ateneo de Manila University has a “museum” devoted to exposing the evils of martial law.

As an Atenean and as a Filipino, I vehemently protest this abomination in college.

“Gattaca” and the ethics of genetic selection

25 colleges with the lowest acceptance rates