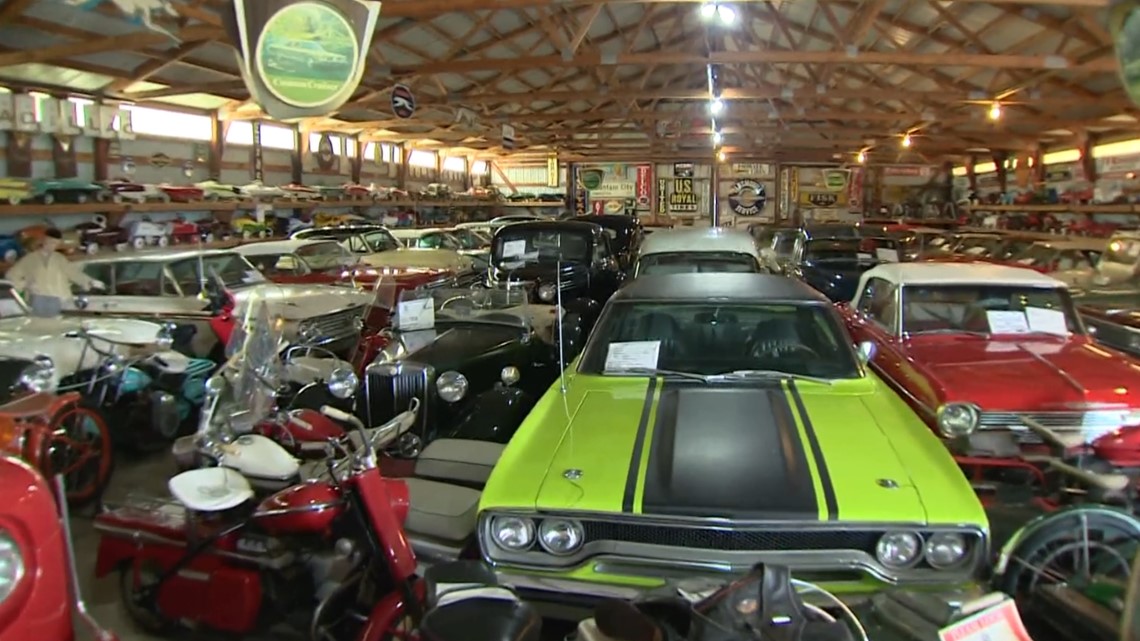 Elmer Duellman was a prolific “gatherer” who amassed a collection of muscle cars, pedal cars and toys that can only be seen to be believed.

FOUNTAIN CITY, Wis. — A career in auto salvage might give anyone an eye for finding timeless treasures, but that doesn’t begin to describe the treasure Elmer Duellman amassed in his lifetime.

“This toy is going to be 100 years old, and at a minimum it will cost $25,000,” said John Rodrigues, a pedal car collector who drove all the way from New Jersey for a massive sale at the former home of Elmer’s Car and Toy Museum outside of Fountain City, Wisconsin.

“I just want to see what will happen,” Rodrigues said. “Look, my hair is on end and I’m bald.”

Mecum Auctions spent months working with the Duellman family to sort and catalog hundreds of wagons, tricycles, bicycles and motorcycles; more than 800 pedal cars and pedal tractors; and 100 other classic cars that Elmer has spent his life collecting.

“The variety of what has been amassed here is probably the best in the world,” said Mecum Auctions COO Sam Murtaugh.

The auction, which started Wednesday and ends this Saturday, includes a total of 2,000 lots from four crowded buildings.

“It was more than an obsession, it was an addiction,” Elmer’s son Brad Duelmann said. “If it had wheels, it had to have it.”

In the process, Elmer’s has become a major source of knowledge in the field of pedal cars and vintage toys. He was often a go-to expert for American Pickers and authored several guides that helped define the market and encourage a new generation of collectors.

“The knowledge he had is beyond mind baffling,” Rodrigues said. “He was an encyclopedia of pedal cars. He really wanted to share that love with others.”

Just months before his death, Elmer Duellman spoke to KARE11 about the unlikely and tragic story that inspired his love for collecting.

“As a young child, I never had a toy,” he said. “There were eight of us. My mother died when I was seven, so we had no money. I went to an auction once and saw these toys. I bought them for a quarter and fifty cents. Some people, they were laughing at you, but soon they weren’t laughing. They were bringing me toys they had at home to sell.

It wasn’t long before his definition of toys broadened.

“By the age of 18, he had already knocked down 42 cars – bought, sold, traded, whatever,” Brad Duellman said.

Yet, it took several years to turn it all into a business.

“My wife and I started a salvage yard with one car,” Elmer said. “I worked 20 hours a day and my wife too, every day.”

Over the years, Elmer’s business and his collection grew steadily. Although he never spent time on the internet, he was able to cultivate a network of “gatherers” in states across the country, who would help him find rare items. On weekends, he would pick them up or arrange deliveries.

They also had a lot of fun during this time, so one of his treasures ended up in the living room of his house.

“It’s a ’29 Model-A, Ford,” Elmer said. “My wife thought it was pretty enough to put around the house. She suggested it.”

This Ford is still parked next to the fireplace inside the house and will not be auctioned, but another parked car will certainly generate auctions.

“The last person to sit there was my father’s youngest grandson.”

Those memories are what Elmer truly treasured.

“He loved sharing his collection,” Brad Duellman said. “He could sit here all day and tell people anything about any article. That was the passion he enjoyed with all of this.”

In the end, it was Elmer’s wish to share his collection with one final auction.

“You know this has to happen someday,” he said during that 2018 interview. “I won’t feel bad. I’ve had my fair share of fun. who would like to have a lot of different things from here, you know?”

Saying goodbye to these things will still not be easy for the family.

“It’s going to be an emotional rollercoaster ahead,” Brad Duellman said. “Every piece you see is part of my dad, but it’s also part of us too.”

There’s a piece that the family deemed too priceless to put up for auction.

Most of the others will be heading off to a number of new destinations, but there’s something to cherish in there too.

“These are memories, that’s what he wanted to share with the rest of the world,” Brad Duellman said. “It will be sad, but we know this stuff is going to go to a good place, people are going to love it.”

For more information on the auction, visit the Elmer’s Auto and Museum the page or the List of Mecum auctions.

Watch all the latest Breaking The News stories in our YouTube Playlist:

Peter Ronstadt, Kidd Squidd and more are inducted into the Tucson Musicians Museum