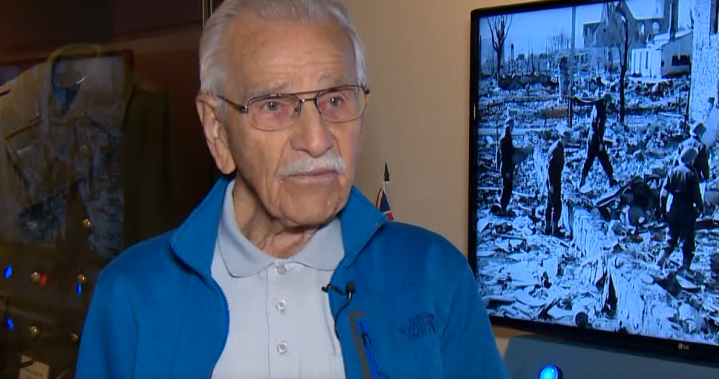 A 103-year-old military veteran visited a museum in Claresholm, Alta., this week to browse an exhibit featuring him and two other pilots.

“It’s a very strong feeling for me (to be featured),” Jim Ashworth told Global News on Thursday.

The exhibition, named Wings over Claresholmfeatures three former Air Force pilots who trained in Claresholm before going overseas to fight in Europe during World War II.

Ashworth joined the Air Force just after Christmas 1939. He received his wings at Claresholm in July 1941 and continued his pilot training in England before joining the Fighter Operational Training Unit (No. 55 OTU) in Scotland.

There Ashworth learned to fly the Hurricane fighter plane, a British single-seat warplane designed in the early 1930s. When the unit ran out of pilots, Ashworth was called upon to provide military air support during campaigns in India and Southeast Asia against Japanese forces.

After serving as a squad leader in the Air Force for 26 years, Ashworth returned to Invermere, British Columbia, where he and his wife Valerie continue to live to this day.

“I told Valerie when we walked in (to the museum on Thursday) that I wanted her to take a look at that famous wall outside with the names of all the pilots and crew members who died from both sides,” he said.

Ashworth said looking back on his time in Claresholm he thought it was a very helpful and friendly community. He spent most of his time at the base where he learned piloting and navigation.

“We were so busy in Claresholm here as students. We didn’t have a lot of time to play outside but one thing I remember was if you had some free time and you were standing on the highway trying to get to Calgary , people here were the first to choose you. said the veteran, adding that sometimes he forgot there was even a war.

“I fly at night with the windows open and you’d wonder why there’s a war because you could look around and just see the Prairies – it was wonderful.”

Bill Kells, executive director of the Claresholm Museum, said it was important to tell stories about the town’s rich history.

He said it was an honor for Ashworth to visit the museum and tell his personal story to staff and archivists.

“Jim is 103 – probably one of the oldest veterans still with us,” Kells said. “It’s such an honor to see him come and… give us all the rich history he gave us.

“To still receive artifacts from this period is just amazing. And we appreciate it so much because we need to flesh out this collection and flesh out the story.

Ashworth said that while he was enjoying his time in the Air Force, he was happy to retire and leave the Army behind.

“I try to live positively and I am no longer in military affairs,” he said.

“I’m just grateful to be here.”

The Museum of the Moon comes to Bolton Priory